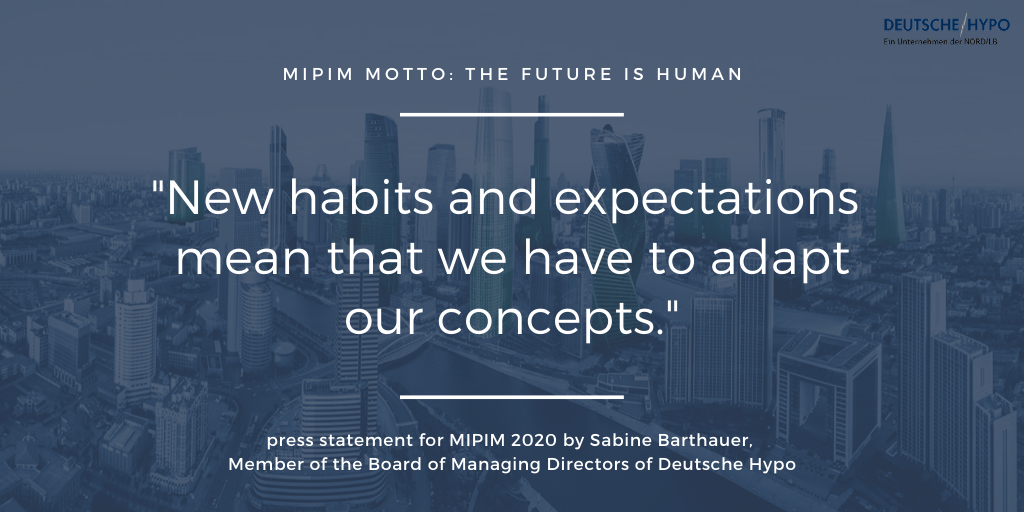 By Sabine Barthauer, Member of the Board of Managing Directors of Deutsche Hypo

“There is still no sign of a reversal in the trend”

“Since the real estate sector has been on a plateau for a long time and the question has been raised repeatedly as to when the peak will be reached, 2019 was again one of the best real estate years in Germany. Demand for real estate remains high and there is still no sign of a trend reversal due to the ongoing phase of low interest rates. The economy is also proving to be robust: Although a decline in GDP was observed in the second quarter of 2019, this was offset in the third quarter. Another increase, with a development of 1.1 percent, is expected for 2020. So there seems to be no end of growth in sight, but we must be aware that geopolitical uncertainties remain. We are therefore well advised to keep a close eye on the risk indicators of a possible trend reversal in these good times.”

“We must create affordable housing for all income groups”

“Living is increasingly becoming a luxury. Rising rents and shortages of living space mean that affordable housing is now in short supply. The housing shortage in the metropolitan area is increasingly noticeable, not only in metropolises such as Berlin and Munich, but even in rural areas. In addition to lower-income groups, middle-income housing seekers are also increasingly confronted with this challenge despite the rent control. In addition, the aspect of sustainability plays an increasing role in the real estate sector, which is contributing to price increases. It is important that we deal with sustainability, but perhaps 80% solutions are the best way to keep costs at a moderate level. The aim should be to create affordable housing for all income groups. However, in the metropolitan areas, the trend is going in exactly the opposite direction. There the rent cap may temporarily alleviate the symptom of rising rents, but the cause is not being dealt with.”

MIPIM motto “The Future is Human”:

“This year’s motto “The Future is Human” brings together topics that are very important at present because in the future everything will revolve more around people again. The habits and expectations are in a state of strong change. In particular the focus on sustainability, and thus also the question of CO2-neutral mobility, has become much more important. In addition, there are new requirements resulting from the structural change – also known as “New Work”. The real estate industry has also taken up the challenge. Real estate players are beginning to adapt their concepts in order to be able to offer people attractive living conditions and at the same time appear attractive to companies and investors. Even today, the beginning of a far-reaching transformation can be observed, leading to an increasing focus on services and on the customer in the conception of properties.”

“Sustainability is a mega trend – in view of climate change and the scarcity of resources, a rethinking is essential. The fact that more and more people are becoming aware of this is made visible not least by the “Fridays for future” movement. The topic has also long since arrived in the real estate industry. As the real estate industry is one of the most important sectors in Germany and accounts for a large share of resource consumption, there is a correspondingly high potential for savings, which we should use. We have accepted this challenge and have developed two new products, Green Bonds and Green Loans, with the aim of creating a green value chain. After all, green financial instruments are no longer just fads, but are more relevant today than ever before. This creates incentives for resource conservation and sustainable, environmentally conscious construction. The fact that our products meet the needs of customers and investors is also demonstrated by the steadily increasing demand for “green buildings”. In addition to the resulting positive ecological and social consequences, we also see economic advantages, which are reflected in particular in the savings of operating costs. As a result of these aspects, sustainability in the real estate industry has become a significant competitive factor and is not a publicity stunt. Deutsche Hypo is also on the right track in this respect and has incorporated the issue into its business model with Green Loans and Green Bonds on both sides of the balance sheet.”

“Urban districts are more in demand than ever”

“In many places, population growth is recorded due to an increase in migration. In addition, a change of habits combined with changing expectations of people can be observed: Shorter distances and a merging of rooms for residing, working and living are in demand. This requires a rethinking of the spatial design of cities and has the consequence that more and more urban districts are being created. The advantage of urban quarters is obvious: the enormous variety of functions. The objects are not only used for living, but also offer opportunities for gastronomy, employers, leisure activities and hotels, to name but a few examples. An investment in a quarter creates a risk diversification, which makes the asset class interesting for investors. Mixed-use properties are more important and in greater demand than ever, so it is essential that we develop concepts today in order to be able to react appropriately to future demands and requirements.”

“Great Britain has left the EU, but it will not be serious until next year”

“For more than three years now, Brexit has been the subject of discussion, and on 1 February the time had come: Great Britain left the EU. Discussions are now beginning on the arrangement of future cooperation, so that the actual effects and extent will only become apparent next year. At present, the UK property market remains little affected by the uncertainty and is proving to be surprisingly robust. Although the overall investment volume has fallen somewhat, market players are once again cautiously optimistic, so that the transaction volume has picked up again in recent months. It now remains to be seen how constructive the negotiations have been and how trade relations with the EU in particular will develop.”

“France’s economic growth was behind that of Germany for a long time but this has changed in 2019. At a rate of 1.3 percent, GDP grew more than twice as fast. The real estate market was also positive in 2019, setting a new record with an investment volume of  41.5 billion. Demand in the office sector in particular remained high. These developments can also be attributed to the actions of President Emmanuel Macron, who has helped to reverse the trend by introducing major reforms.”

“The Netherlands leads by example in the fight against climate change”

“After the transaction volume in the Netherlands had already reached an enormous level in 2018, the trend continued in 2019. In particular, the demand for office and residential real estate remained high last year. The Netherlands, which is known as a pioneer in many areas, has also already set its sights firmly on sustainability. In order to take a further step towards sustainability, a stricter energy efficiency standard has been developed for office buildings, which must be implemented by 2023: Office buildings with an energy efficiency standard worse than “C” may no longer be operated as such. Revolutionary steps are therefore also needed to achieve the EU’s climate targets. After all, our industry can and must make a significant contribution to achieving the targets.”

“The commercial real estate market in Poland, reached a new record high in 2019 with a transaction volume of  7.4 billion. Economic growth also continues to be positive: it has been above the European average since 2002. Investors recognise the appeal of the real estate market and continue their investments. Nevertheless, we must take into account that Poland is still at a lower level in relation to the other core markets in Europe and that there is an overall need to catch up in the top locations. However, the market is developing with great optimism.”

“Since 2014, Spanish economic growth has been above the European average, a trend that has continued in 2019. This had a positive effect on the investment volume, which, at  12 billion last year, reached the same level as in the previous year. Although the level is still lower compared to countries such as Germany, UK or France, Spain is increasingly catching up. In particular, the demand for office and residential properties has risen sharply and the hotel industry is also booming due to the great increase in tourism.”

REECOX Germany down sharply once again

The REECOX Germany closes the third quarter at 258.9 points. […]